In 2012, we discovered the unknown and unexplored diaries and writings of Imrich Matyáš (1896-1974). They were found in the heritage left after the founder of the Ganymedes Movement, Marián Vojtek. Imrich Matyáš was a clerk in the field of social and pension insurance, but has also been working as a publicist for the Voice of the Sexual Minority and a tireless activist for decriminalisation of homosexuality for more than forty years.

In his works and memoirs, Matyáš reflects the efforts of the "minority" movement from the period of the First Czechoslovak Republic, as well as the period after the Second World War, the rise of Communists to power, the 1950s and the decriminalisation in 1961.

His reflections and memories are unique not only in that they offer us the view of a direct participant in this "ethical struggle for human dignity", but they also provide us with knowledge and memories that archival sources cannot provide us with. Through Matyáš’s works, specific people speak to us with their personal stories, desires and sorrows.

The whole story of Imrich Matyáš is available on www.matyas.sk

“It has been proven that the homosexual establishment is a natural state which could not be suppressed by inquisition, imprisonment, solicitation, beatings, or § 241 of our Criminal Code. Advanced science has found that the homosexual foundation is a nature, a state that can never be changed, and, most importantly - this sexual nature is not harmful to anyone in the world. So what is there to be punished and why do honest people have to be treated with cruelty? - Common logic and reason that are based on the findings of science lead to the conclusion that it is cruel to declassify, despise, or regard as inferior and second-class citizens these people with a harmless sexual nature.” 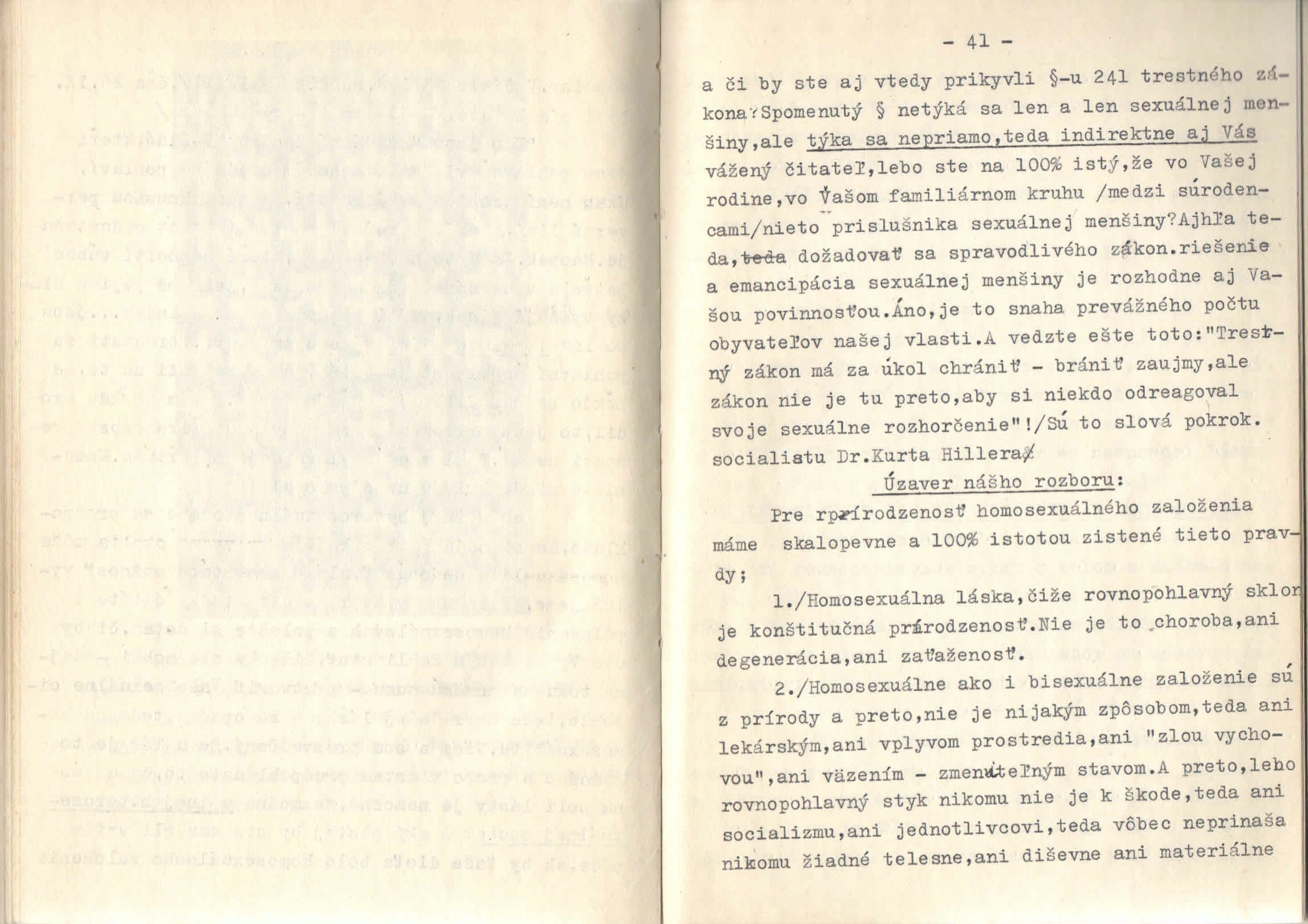 Scroll down for translation

... and would you agree with the Art. 241 of the Penal Code? That article is not solely focused on the sexual minority, but indirectly, it may affect you as well. After all, are you 100% sure that in your family, or familiar circles (your siblings), there is no member of the sexual minority? Well then, we should demand a just law then. A solution and the emancipation of the sexual minority is certainly your duty as well. Yes, it is an effort of the majority of our homeland’s inhabitants. And be aware of this: “The penal code is supposed to protect interests, not to serve as an outlet for somebody who is sexually frustrated!” (These are the words of a progressive socialist, Dr. Kurt Hiller.)

Conclusion of our analysis:
We have found the following true evidence that support the natural origin of homosexuality to a 100% extent and with full certainty:
1. Homosexual love, i.e. same-sex orientation, is a constitutional nature. It is not a disease, nor a degeneration, nor a burden.
2. 2. Homosexual and bisexual orientation are natural, and the state cannot be altered – neither by medical interventions, the influence of the environment, “bad education” nor imprisonment” – by any means whatsoever. And given that same-sex intercourse harms nobody, neither socialism, nor individuals, i.e. it does not cause physical, mental or material 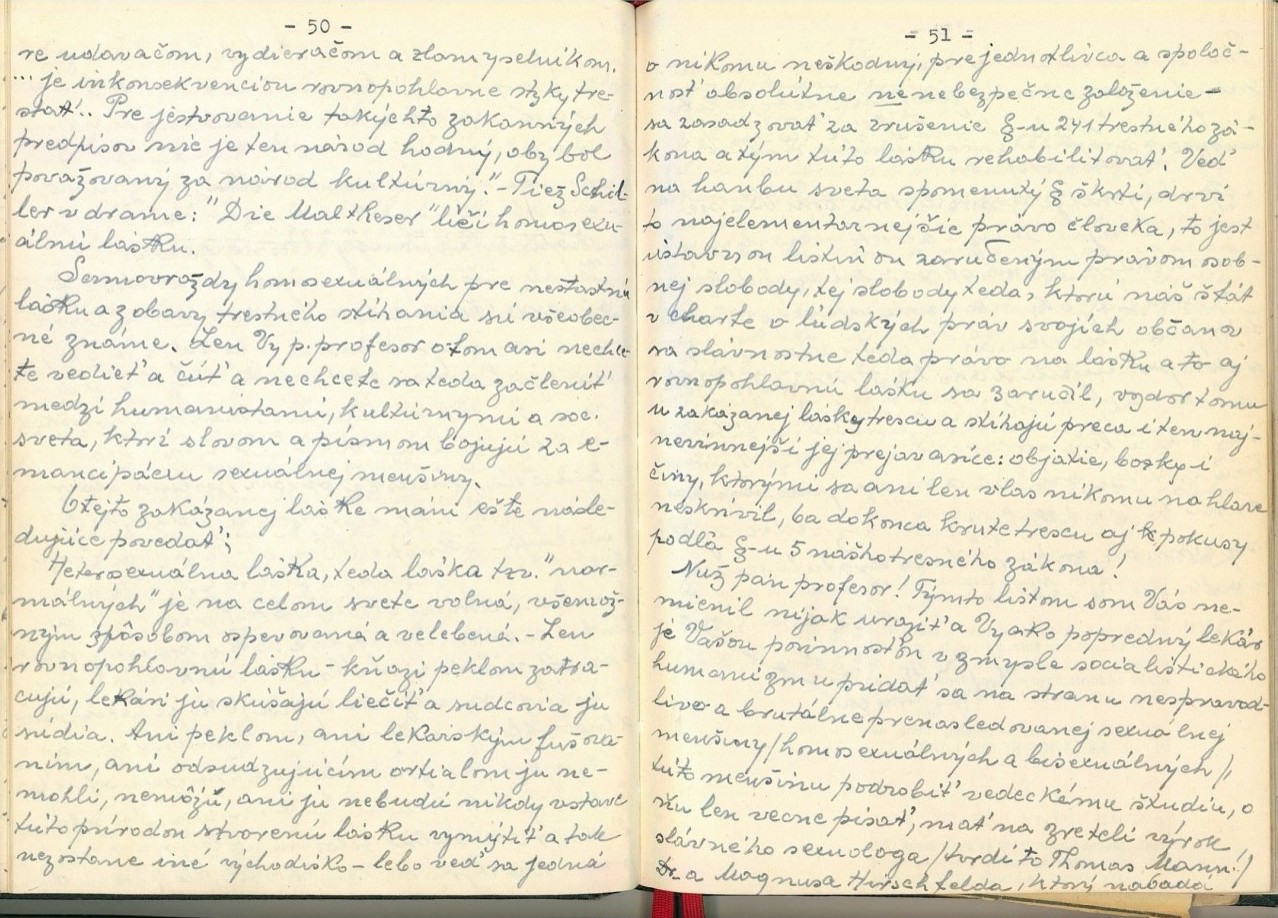 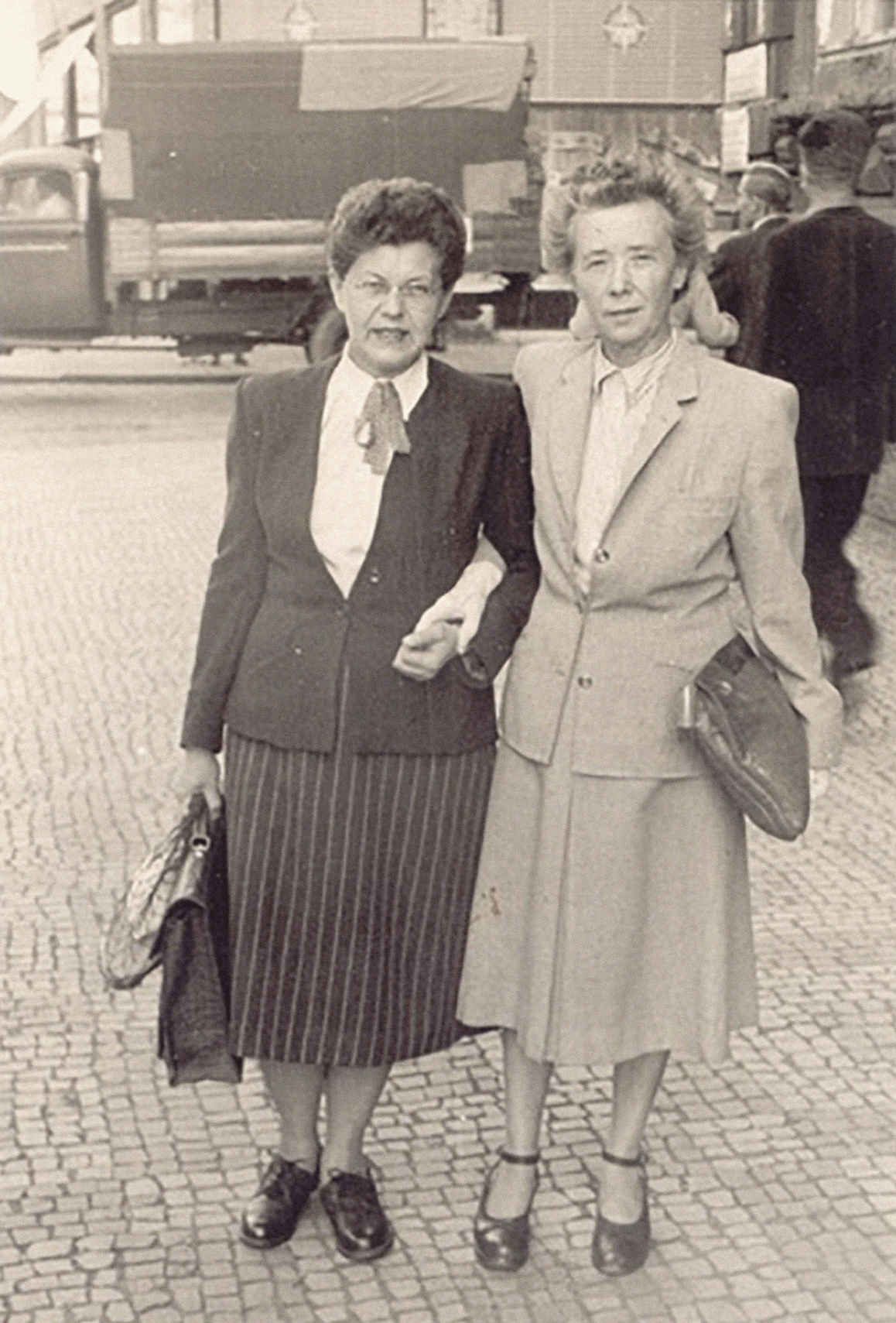 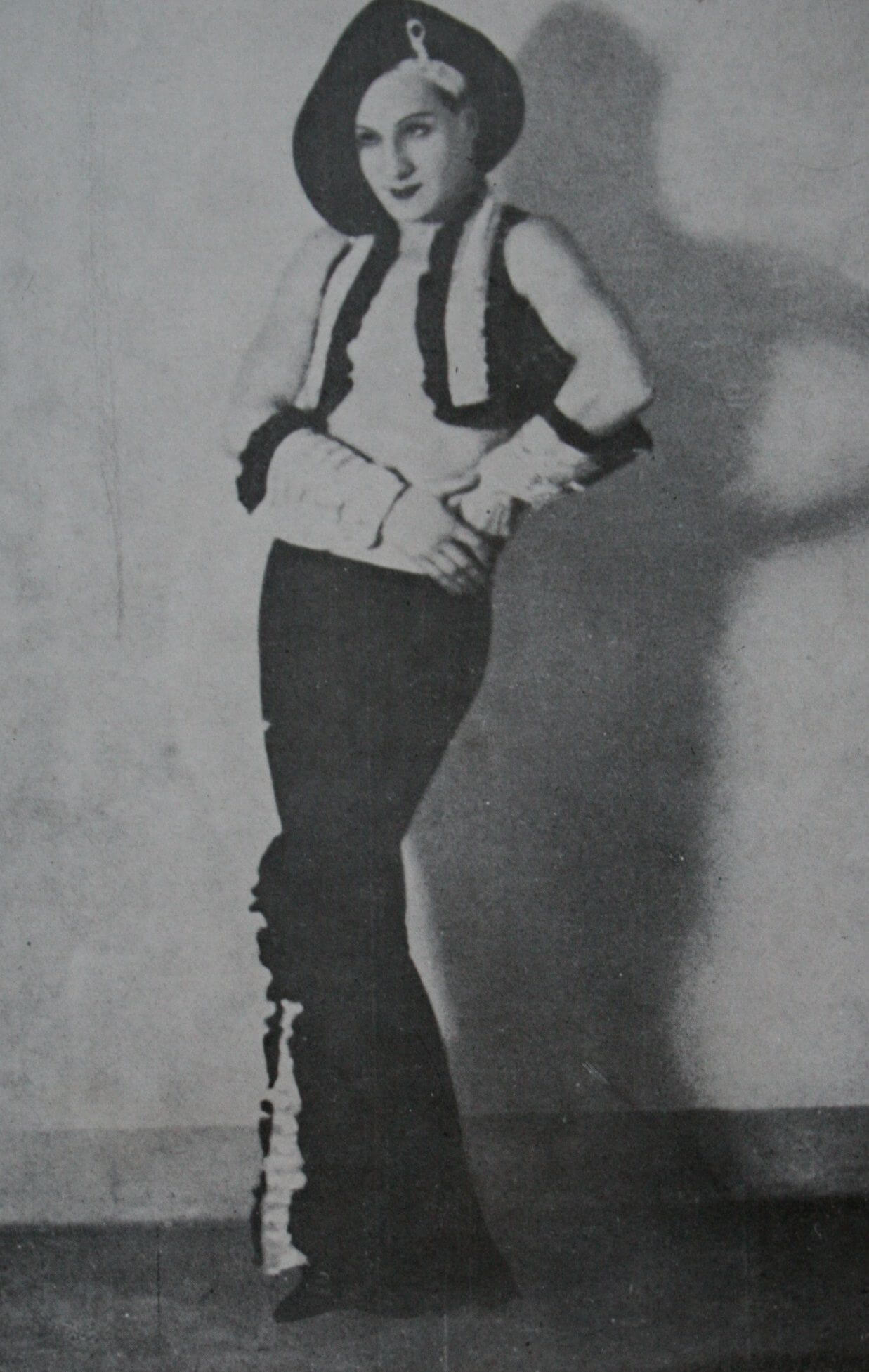 The noble mission of "The Friendship Society" (est. 1932) 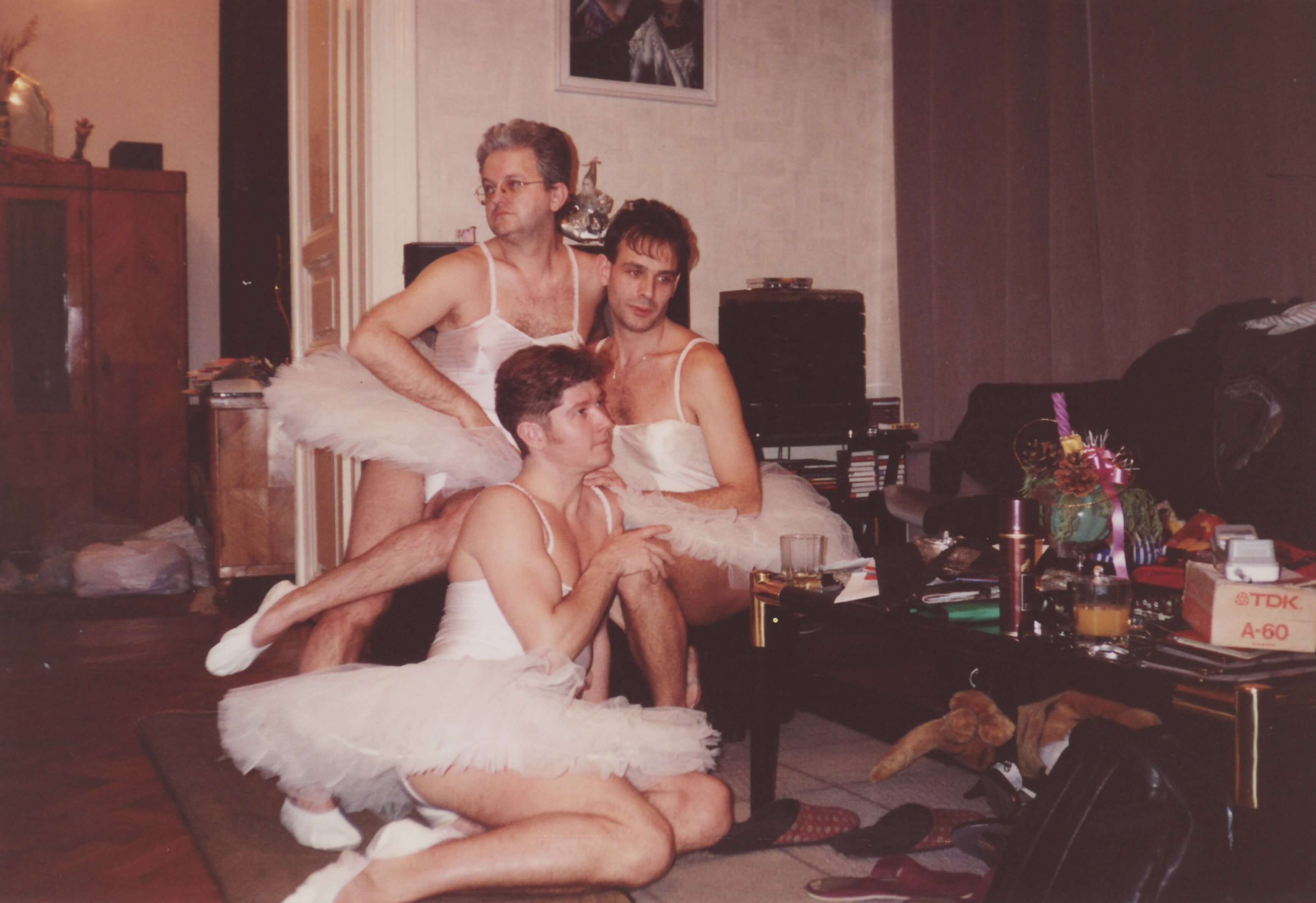 Cafés, flats and even parks - the secret meeting places of sexual minorities